Have you ever read a story that left you mystified? The Bible is such an amazing book filled with not just stories to entertain but words that carries strong emotions within us that leave an invariable lesson and teaching in our own lives today.

The story of Paul and Barnabas is truly amazing and resonates strongly within my life.

Imagine getting the beat down of your life! People who just treated you like a God has suddenly turned on you and started throwing stones at you. Leaving you for dead!


“In Lystra there sat a man who was lame. He had been that way from birth and had never walked. He listened to Paul as he was speaking. Paul looked directly at him, saw that he had faith to be healed and called out, “Stand up on your feet!” At that, the man jumped up and began to walk. When the crowd saw what Paul had done, they shouted in the Lycaonian language, “The gods have come down to us in human form!” Barnabas they called Zeus, and Paul they called Hermes because he was the chief speaker. The priest of Zeus, whose temple was just outside the city, brought bulls and wreaths to the city gates because he and the crowd wanted to offer sacrifices to them. But when the apostles Barnabas and Paul heard of this, they tore their clothes and rushed out into the crowd, shouting: “Friends, why are you doing this? We too are only human, like you. We are bringing you good news, telling you to turn from these worthless things to the living God, who made the heavens and the earth and the sea and everything in them. In the past, he let all nations go their own way. Yet he has not left himself without testimony: He has shown kindness by giving you rain from heaven and crops in their seasons; he provides you with plenty of food and fills your hearts with joy.” Even with these words, they had difficulty keeping the crowd from sacrificing to them. Then some Jews came from Antioch and Iconium and won the crowd over. They stoned Paul and dragged him outside the city, thinking he was dead. But after the disciples had gathered around him, he got up and went back into the city. The next day he and Barnabas left for Derbe.” Acts‬ ‭14:8-20‬ ‭ 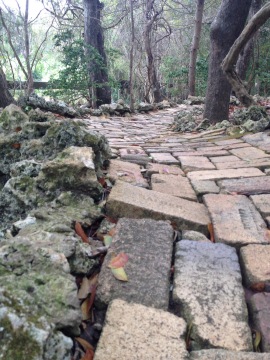 Isn’t that mind blowing! Paul leaves no commentary here on how he felt… He doesn’t go to a healer… He doesn’t take days off… He doesn’t quit!

He just got up and went back into the city and then the next day he walked 60 miles to another city…. 60 miles!

Let’s be honest with ourselves… How many of us would have done that?

Paul realized that “My life is not my own”…

Thought: Time is short. The harvest is plentiful and workers are few. When the Devil knocks you down just get back up and keep on going. Don’t quit!

Prayer: Father, forgive us when we open the door for the evil one to cause us to complain or just quit your work. Strengthen us Lord and grant us thy faith. May we obey your will joyfully in all storms of life. Amen