We use cookies to ensure that we give you the best experience on our website Close
Skip to content
Do you have your ticket?
Recently, I had the pleasure of spending time with a very close relative of mine. We had an amazing time where we fellowshipped together, praised God and prayed. It was such an amazing, fun and spirit filled week. Then it was time for her to leave.
After dropping her off at airport and returning home I received a call. I thought that she was calling to tell us that she checked in to flight and all was okay. Instead, she was calling to tell us that she had encountered some problems with her ticket and needed our assistance to rectify the situation.
After speaking with the airline manager on duty and understanding clearly the issue I started working on my end quickly to make the calls necessary to fix the problem. The manager was extremely helpful, detailed and full of compassion and empathy which allowed me to zero in right away with what I needed to do. I did my part but there was still a tense waiting game because we were relying on others to also do their part. As the time drew closer and closer for boarding we prayed and kept the faith; our prayers were answered five minutes prior to the flight closing. 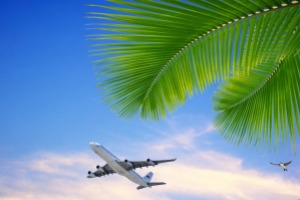 I felt that the Lord used this story to instill within me this tidbit.

The plane is like the Kingdom of God. In order to enter it, we need a plane ticket and that ticket is salvation. Unlike a plane ticket though, you don’t have to pay anything because your salvation has been bought and paid for you in the death and resurrection of our Lord, Jesus Christ. Salvation can be easily achieved as outlined in Romans 10:9, “If you declare with your mouth, “Jesus is Lord,” and believe in your heart that God raised him from the dead, you will be saved”.
Look around us… look at a number of people who have died without making Christ the Lord and Savior of their life and have missed the plane… have missed the kingdom of heaven. “But the cowardly, the unbelieving, the vile, the murders, the sexually immoral, those who practice magic arts, the idolaters and all liars – they will be consigned to the fiery lake of burning sulfur.” Revelation 21:8 and Psalm 32:1-2,5-6,10 “Blessed is the one whose transgressions are forgiven, whose sins are covered. Blessed is the one whose sin the Lord does not count against them and in whose spirit is no deceit… Then I acknowledged my sin to you and did not cover up my iniquity. I said, “I will confess my transgressions to the Lord.” And you forgave the guilt of my sin. Therefore let all the faithful pray to you while you may be found; surely the rising of the mighty waters will not reach them. Many are the woes of the wicked, but the Lord’s unfailing love surrounds the one who trusts in him.”
We are alive today and we have a choice.

Do we want to get on the flight?

Do you have your ticket?

If yes, are we willing to accept help from the Manager?
The manager is Jesus and he is reaching his hands out to us, ready and willing to help.  “Who then is the one who condemns? No one. Christ Jesus who died – more than that, who was raised to life – is at the right hand of God interceding for us.” Romans 8:34
Why is he interceding for us? John 3:16-17 tells us that “For God so loved the world that he gave his one and only Son, that whoever believes in him shall not perish but have eternal life. For God did not send his Son into the world to condemn the world, but to save the world through him.“
Food for thought: Do not choose to live in sin for another day. Accept Jesus’ help today.
Prayer: Compassionate Father, forgive me for I have sinned and fallen short of your glory. I declare with my mouth that Jesus is Lord and that HE died for my sins and was risen from the dead. And I believe in my heart that you love me and I am saved. In Jesus name. Amen
May God’s grace, mercy and peace be with you.